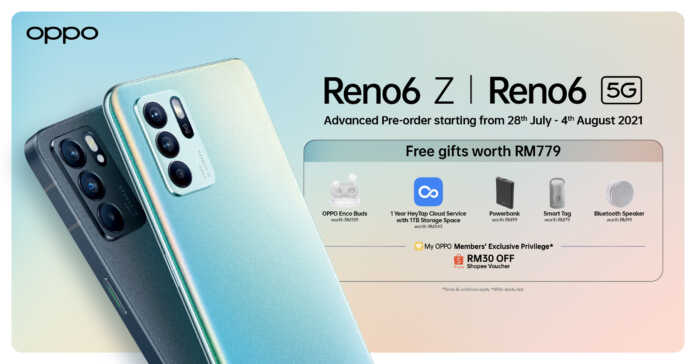 OPPO Malaysia had recently announced that it is now taking in pre-orders of both the OPPO Reno6 Z or OPPO Reno6 5G.

The duo makes up OPPO’s Reno6 Series which is expected to be launched on 4th August 2021.

Specifications of the smartphone have not been released just yet by the company but the China variants of the Reno6 smartphone are to be a reference, the Reno6 will likely come with a MediaTek MT6893 Dimensity 1200 5G, with a 64MP wide camera leading it’s main triple rear camera set-up.

The smartphone features a 6.55″ FullHD+ 90Hz curved AMOLED screen with a under screen fingerprint scanner.

When is the pre-orders

The pre-orders will be available from 28th July till 4th August 2021.

According to the brand, those who pre-order will enjoy free gifts worth RM779 and they include:

On top of that, My OPPO App members will also enjoy an exclusive RM30 off Shopee Voucher as well for every pre-order purchase of an OPPO Reno6 Series smartphone.

Where to pre-order OPPO Reno6 Z or Reno6 5G

Both smartphones can be pre-ordered at OPPO Brand Stores or authorized dealers with only RM100 as a deposit.

Advanced pre-orders can also be made on Shopee, with the first 300getting an RM99 mystery box.

Additionally, sharing the pre-order link for the Shopee advanced pre-order with four friends can also help one get a RM30 off voucher which will be valid from 30th July – 14th August 2021 (not stackable with other vouchers).

Last but not least those preferring to advanced pre-orders from the OPPO Online Store will ony need to do so at RM19.90 with OPPO Malaysia offering an extra RM120 off voucher along with a free Fast-Charging Powerbank which is limited to the first 300 customers only.