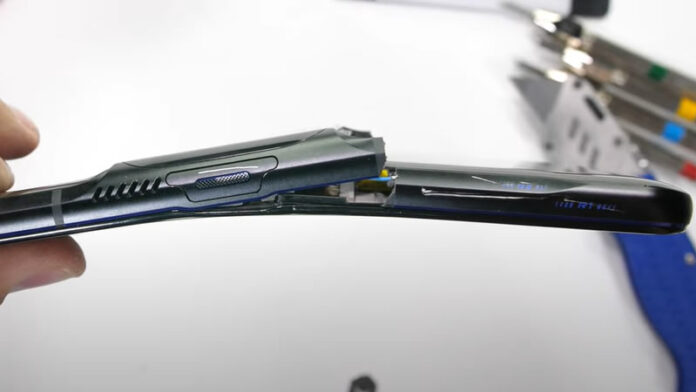 The Lenovo Legion Duel 2 is a pretty cool phone. It looks cool, and it has some awesome specifications.

However, all these glamour is disappointed by it’s poor durability.

In one of Zack’s latest durability test, the youtuber showed how the Lenovo gaming phone snapped into two pieces, and then three, when he applied his ever popular bend test.

Under the burn test, the AMOLED screen burns after 30 seconds and also doesn’t recover, which technically means you can’t leave the phone under fire for too long or else you’d lose the screen.

However, those two test are barely key to Zach’s durability test as one would likely still get scratches on their phones when handling the phone through long periods of ownership, and well, you don’t exactly plan to burn your phone away as well.

So that bring me to the bend test, which would prove important in incidents where one accidentally seats on the phone, or has the phone withstand sudden pressure to the extend it gets bended.

Over the years, most phone manufacturers have improved the structure of their phone and passed this same bend test with flying colours. However, it seems Lenovo’s Legion Duel 2 isn’t one of them.

With some pressure applied, Zack easily snaps the Legion Duel 2 in to two prices, and continues to break it to three pieces at his second attempt.

The test reveals that the phone’s body structure is weakened by the location of the antenna lines on both sides of the Legion Duel 2.

It is made from plastic, and caves in to pressure.

That said, the Legion Duel 2 is still a pretty awesome phone in my opinion.

However, it will be best if you got a case to ensure any accidental situations wouldn’t break it into two. That said, I’d strongly recommend a metal case for this phone at least.

You can watch Zack’s full durability test below.

Samsung Galaxy A31 and Galaxy A11 arrive in Myanmar