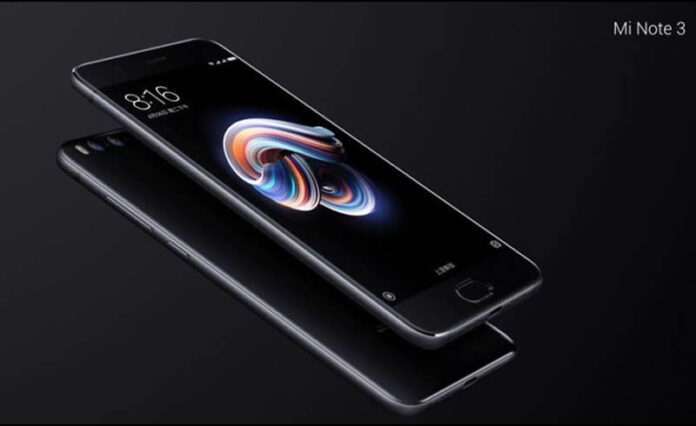 Along side the Mi Mix 2 which made headlines today, Xiaomi also unveiled the Mi Note 3.

I’ve used the first generation Mi Note, despite its two year age, it is still an awesome smartphone, hence why I believe the Mi Note 3 would be no different.

This is particularly believable since the Mi Note 3 comes as a larger version of the Mi 6, as previously mentioned by Lin Bin.

Anyway, like my thoughts on the Mi Mix 2, my thoughts here are entirely based on what I read online, photos, and of course my knowledge of smartphones as I do not have a unit of the Mi Note 3 lying around for me to review anytime soon.

Lin Bin was right (duh, obviously), by saying that the Mi Note is a larger version of the Mi 6.

Here, the shape of the Mi 6 is enlarged into the Mi Note 3 and there’s so many resemblance, hence why I feel there’s nothing more to say about the physical shape and layout of the phone.

But then again, for the sake of troubling you to read, let me tell you that I love the fact the fingerprint scanner is on the ‘home button’, I love the nicely curved seramix rear, and I love the thin bezels of the phone.

Black and white remain my preferred colours for the Mi Note 3, despite the fact it is available in red and also bright blue, which to me looks cheap.

When it comes to specifications, there’s a slight difference between the Mi Note 3 and the Mi 6.

While the similarities of both phones are seen in the dual lens rear camera, the storage space and RAM variants, and the material made to build the phone, there’s contrasting difference when it comes to other important components.

For starters, the Mi Note 3 is powered by the Snapdragon 660 processor and has a larger screen with lower density if compared to the Mi 6. The front camera for the Mi Note 3 is also bigger in megapixels, and the weight is also less than the Mi 6, coming at only 163g.

Being a ‘Note’ of course the Mi Note is larger than the Mi 6, but interestingly smaller than the iPhone 7 Plus.

Xiaomi actually made it a point to compare the iPhone 7 Plus with the Mi Note 3, of course to show off how their’s is smaller despite the same screen size, which is a plus point of course.

The rear camera of the Mi Note 3 shares similarities with the Mi 6, and since we all know how amazing the Mi 6 photos are, Xiaomi decided to share some of the ones taken with the Mi Note 3 instead (as seen below).

Obviously, dual cameras allow the Mi Note 3 to take impressive photos, and the bokeh effect on the Mi Note 3 is really something to shout about.

In case you are wondering, both rear cameras of the Mi Note 3 are 12MP, with Sony lens, so there’s definitely quality there.

Like the Mi 6 and Mi Mix, the Mi Note 3 battery comes with quick charge, so there’s really no worries when you do run out of juice.

Anyway, a battery sized 3,500mAh should be good enough to last you a complete day on a normal use, so don’t worry too much about battery drain. Also, the MIUI, a tweaked version of Android, doesn’t drain battery that much, so really, don’t worry.

Like I said above, I do not favour blue as a smartphone colour, so the black versions featuring the 6GB + 128GB would be my natural choice if I were to get myself a Mi Note 3.

The question now however is when the Mi Note 3 would actually be available in Malaysia, especially since there’s no word of its sales during the launching today. It is however likely to be made available in Xiaomi’s AliExpress Online Store first.

Uh, I am very tempted to buy the Mi Note 3 if it’s available in Malaysia because there’s so much to look forward to in this phone.

While it may not be bezel-free like the Mi Mix 2, the 12MP Sony lens dual-camera, coupled with the huge 6GB RAM and 128 storage space is really tempting, especially when I consider the RM1,865 pricing. Did I mention it’s also smaller and lighter than most phones in its class?

The only dislike I have for the phone is probably it’s lack of waterproofing, but that’s a small matter when I look back at the price, and compare it to rivals. – phonesentral.com

Xiaomi will introduce a new phone series this September 5